The Unveiling of the Mural dedicated to Iona Monahan: A First for Jacques Lebleu

Thursay, September 20, 2018 marked a milestone for the District Central. This fall day was a unique opportunity to pay tribute to a revolutionary icon in the cultural sphere of the greater Montreal area, with the inauguration of a mural dedicated to the fashion world: Iona and the Catwalk. The founder of the project, the Société de développement commercial (SDC) District Central developed the challenging task of putting a face to the name of this public space coveted by the workers and residents of the Chabanel area. While this vertical space has gone unnoticed for so long, it is now front and centre thanks to the large-size revelation of the journalist’s unforgettable features. Not only was this fashion pioneer named woman of year in the late 70s, she also earned two honours from the Order of Canada. 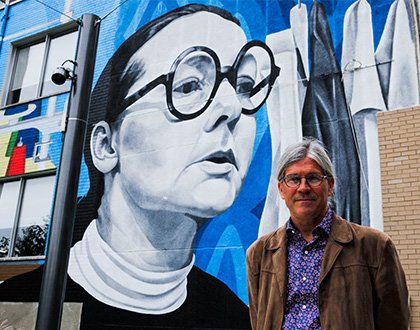 For the first time, Jacques Lebleu, in collaboration with muralist Annie Hamel, demonstrated his talent though this artistic gesture that required more than 300 hours of work. Reflecting on this feat, he says: “I look forward to seeing the mural in the winter, how the snow and nakedness of the trees will expose other aspects of the mural”.

To bring this work to life, the two artists had to step up their skills. First they created a mock-up and then enlarged their creation based on the roughness of the façade. The windows of the building dictated the pictorial composition of Iona and the Catwalk. The journalist’s face was painted using a projection on the wall, then coloured with chalk before the finishing touches were made adding a lot of character to the square on Esplanade Ave. 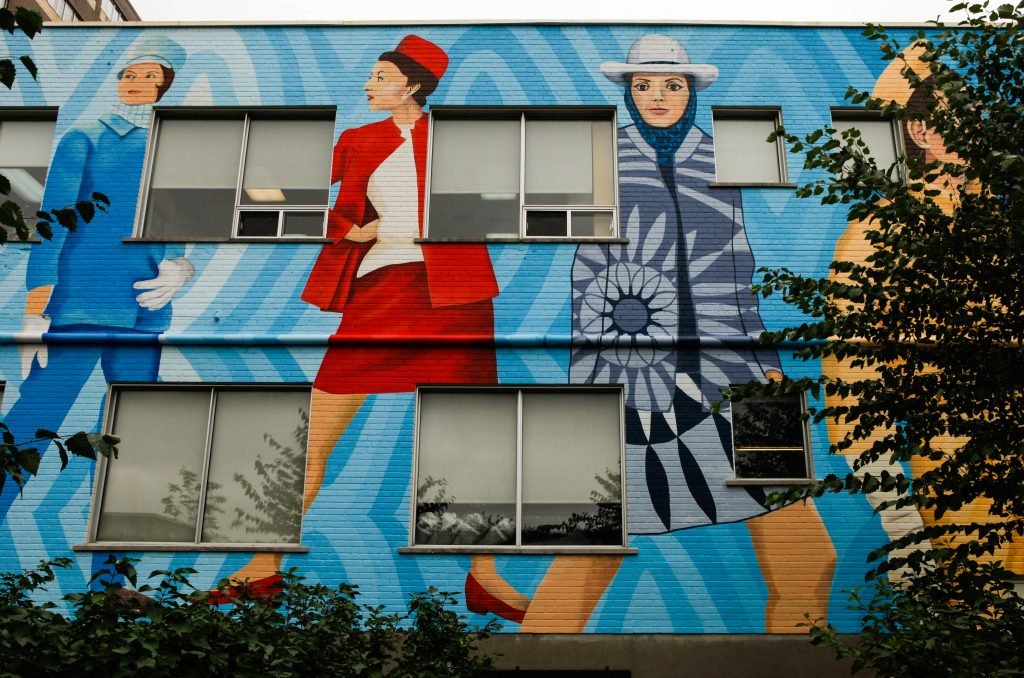 Through his work, Jacques Lebleu was able to capture a fundamental perspective of the bubbling spirit of Chabanel. The English expression catwalk is one of the storylines of this event and provides a snapshot of the fashion shows Iona helped organize. To the left of Iona, we can see a seamstress hard at work, labour that perfectly reflects the very essence of the area, namely the lasting textile industry in Montreal’s fashion district. The other female figures appearing on the fresco are inspired by Iona’s influence of Quebec designers. Magazine clippings from The Montrealer and Mayfair captured the attention of the muralist and inspired their clothing style.

On this occasion, two artistic stations served as a reminder of the journalistic environment and the fashion of Iona Monahan. Each of the guests received their very own origami pin. The specificity of these folds borrowed from Japanese art was to create them using newsprint that echoed the work of the columnist. A few feet away, a screen printer from UNIK Printshop was printing “Iona on Fashion” cardboard prints using source images of the Montreal pioneer.

The gamble paid off for the SDC District Central, which actively participates in the area’s revitalization plans particularly by making this honorary place the focal point of Chabanel Street.