A new mural for the District Central

Two years after paying tribute to Iona Monahan, a new mural was unveiled in the District Central. Designed by Cyrielle Tremblay, this monumental painting takes into account the context of the district’s economic revival, visible on the east facade of the building located at 99 Chabanel West.

“A mural in line with the area’s economic recovery”. The mural mentioned in the presentation document bears the signature of Cyrielle Tremblay. This is not a first for the artist in Montreal, having completed another painting, as part of the MURAL Festival (to discover at the corner of Parc Ave. and Prince-Arthur). 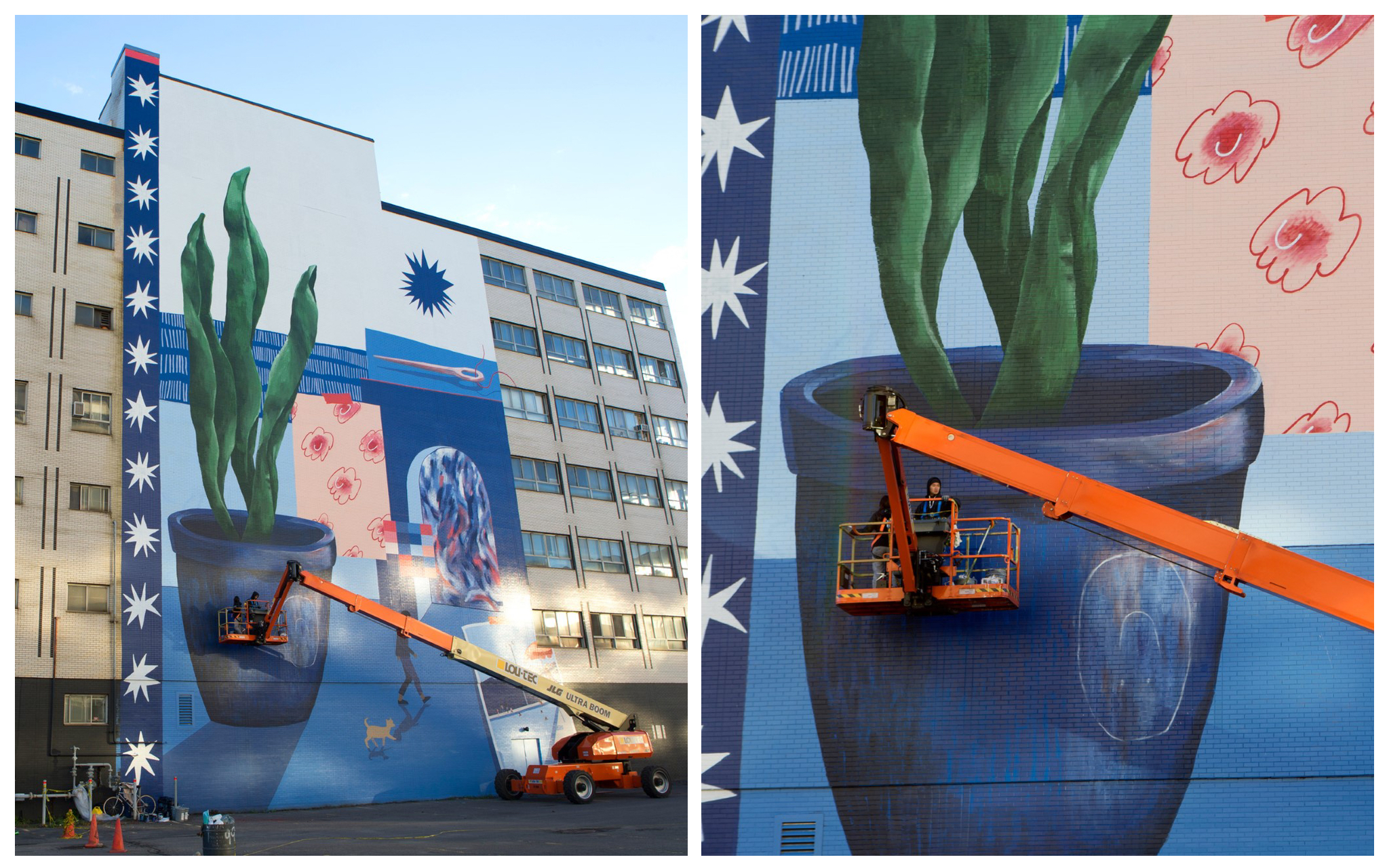 To catch a glimpse of her highest work, you have to visit the District Central, specifically 99 Chabanel West. The result is breathtaking. The creation stretches 30 metres long; its strong blue colours contrast with the rest of the building, owned by Howard Szalavetz and HS Property Group. The latter has no regrets in supporting this collective adventure, together with the Société de développement commercial du District Central, the Ahuntsic-Cartierville borough and the galerie d’art Yves Laroche,

who solicited Cyrielle Tremblay for the realization of this urban painting. “It is an Incredible project and the mural is spectacular! This mural positions 99 Chabanel as the new home of artists in the neighbourhood. We are proud to have been able to rely on the talent of an artist like Ms. Tremblay, who enjoys an enviable reputation internationally and was able to reflect the image of the neighbourhood in her work.”

A piece of art that promotes the area

For Yves Laroche, this piece is a call to the artistic community to harmoniously come together in the glorious past of the neighbourhood. “This mural takes us to the very near future where creators from all walks of life will unite to become a part of a new adventure that we will all witness soon enough. The richness of its colours makes us reflect on a world filled with new ideas, and unprecedented opportunities.” 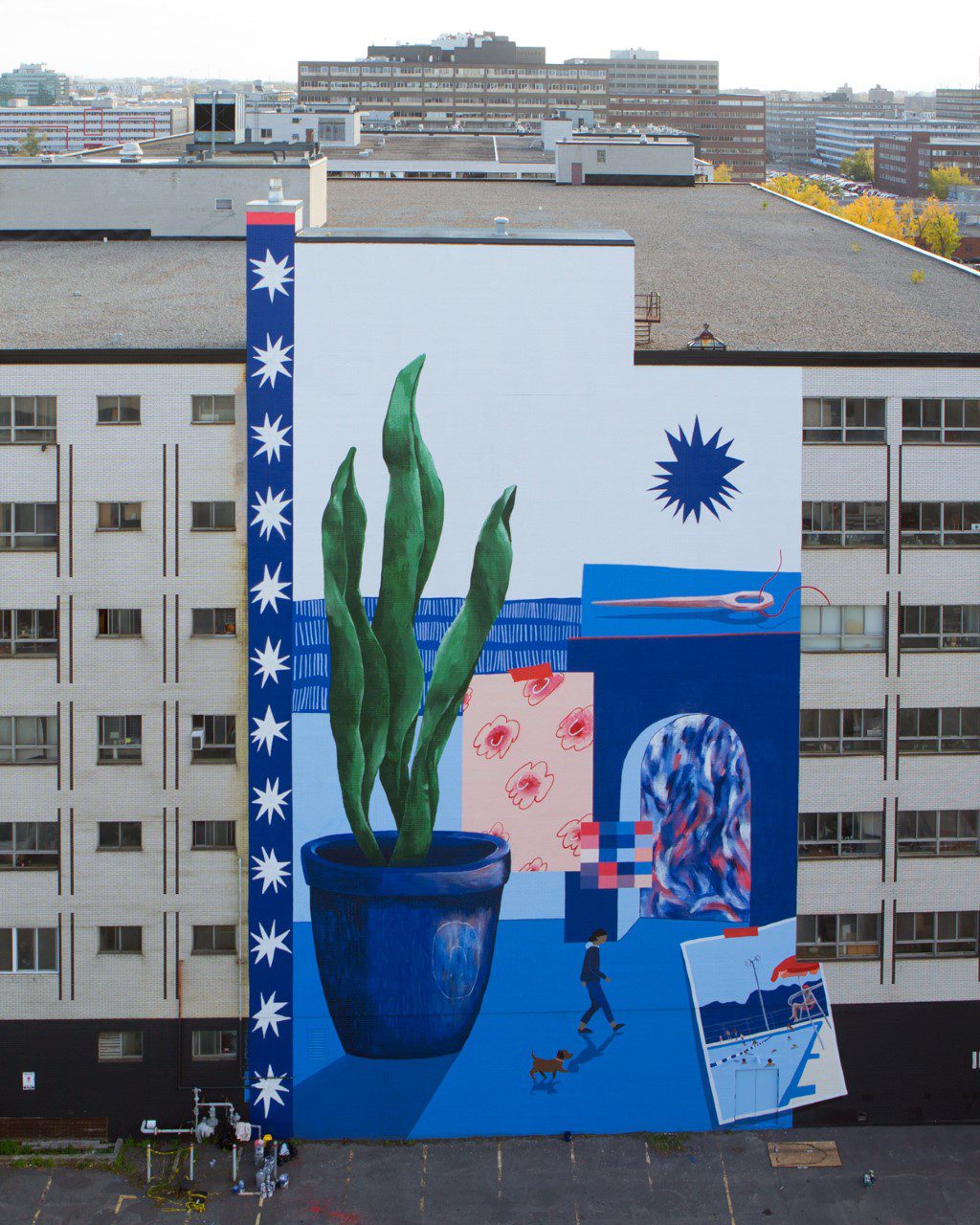 The future is also painted in the words of Émilie Thuillier, Borough Mayor, for whom this gigantic fresco illustrates the transformation of the Chabanel district. “This rebirth is built on the pillars of the past while looking to the future. The effect of this impressive mural is perfectly in line with the revitalization of the district.”

Overcoming a fear of heights

To give life to this heterogeneous composition, Cyrielle Tremblay had to meet certain guidelines, by ensuring that certain symbols related to the history and plurality of the District Central were included, such as the needle and thread that reminds us of the weight of the textile industry, or the small pixelated square that gives a nod to new technologies. And of course, the impressive plant, the focal point of it all, that “symbolizes a joint project of growth, life and sustainability.”

The muralist also had to overcome her fear of heights, “especially when the wind would make the basket move”. In all, it took nearly a month – and dozens of litres of paint- to complete this creation. She also had to contend with unforeseen changes in weather, during a period of the year- fall – when temperatures are not as mild as in summer. It was, however, the first time that she had designed a mural so late in the year.

Cyrielle Tremblay’s mural is in addition to the one that was created two years ago, in collaboration with 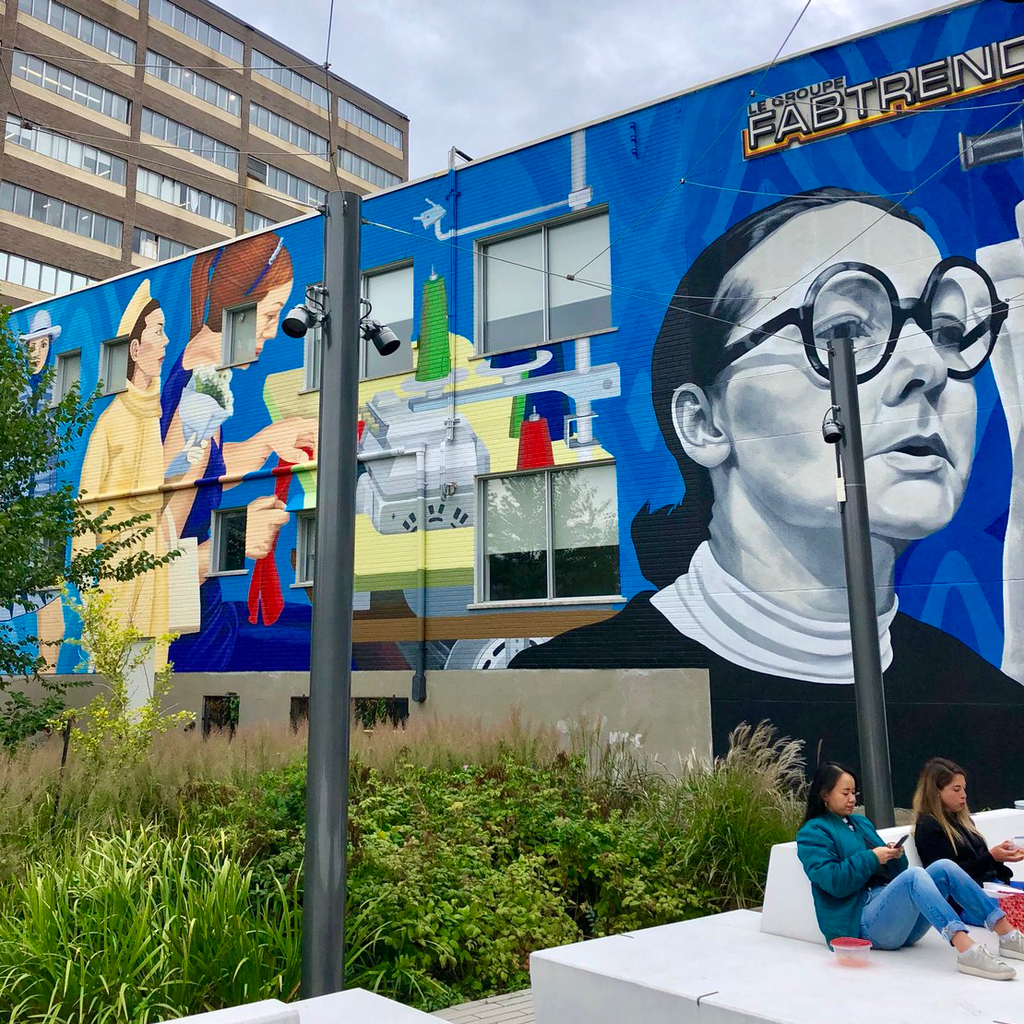 multidisciplinary artist Jacques Lebleu, which pays tribute to fashion journalist Iona Monahan, at the place which bears her name.

And that is just the beginning, as Delia de Gasperis, Chair of the Board of Directors for the Société de développement commercial du District Central, remind us. She is proud and happy to have brought partners and contributors together who helped make this project possible. “Beautifying our territory and offering works of art to the District Central is also an objective of our organization. Our goal is to work on the creation of other murals in the coming years.”