Wheat in all its forms at festival Ste-Anne

On Sunday August 26, the streets of the District Central were a parade of unique floats, all in tribute to wheat. This event hosted the residents of the Saint-Simon-Apôtre neighbourhood, just by Chabanel Street, in honour of St. Anne, an emblematic figure of the New Testament being the mother of the Virgin Mary. This tradition began more than 130 years ago in central Italy. According to popular belief, an abundance of wheat is a good sign and honouring it is recognizing its nourishing qualities.

In 1966, the Chabanel area served as a breeding ground for Italians who came from many different backgrounds to build a community life: the Associzione Jelsese di Montréal. This association offers a comprehensive calendar of sporting events including golf, soccer and bowling tournaments, as well as the St. Anne Festival that has been celebrated every year since 1982.

Representatives of the Jelsi village (province of Campobasso) decided to celebrate this day in their adopted neighbourhood in Montreal, an old manufacturing sector where labour market was saturated with Italian workers.

Andréa Passarelli, the 17th President of the Association, is one of the figureheads of this event. He came to Canada in 2002 and eagerly became involved in his community and closely followed the creation of floats during the summer season. If he could make one wish, it would be to celebrate this ritual throughout the world. It also important that “working with wheat achieve greater recognition and continue to be mastered by future generations” says Andréa.

The organizers purchase wheat three weeks before the parade in Sainte-Anne-de-Prescott (Ontario) located 90 kilometres from Montreal. The wheat is cultivated throughout the village and is then transported to Chabanel where it is transformed into ephemeral art. To build the floats, the straws and grains of wheat are well manipulated in order to create the most natural colour effects possible. “For the duration of the Festival, all generations participate in creating the floats” adding that “pregnant women, children and the elderly come together to weave various type of wheat heads.” 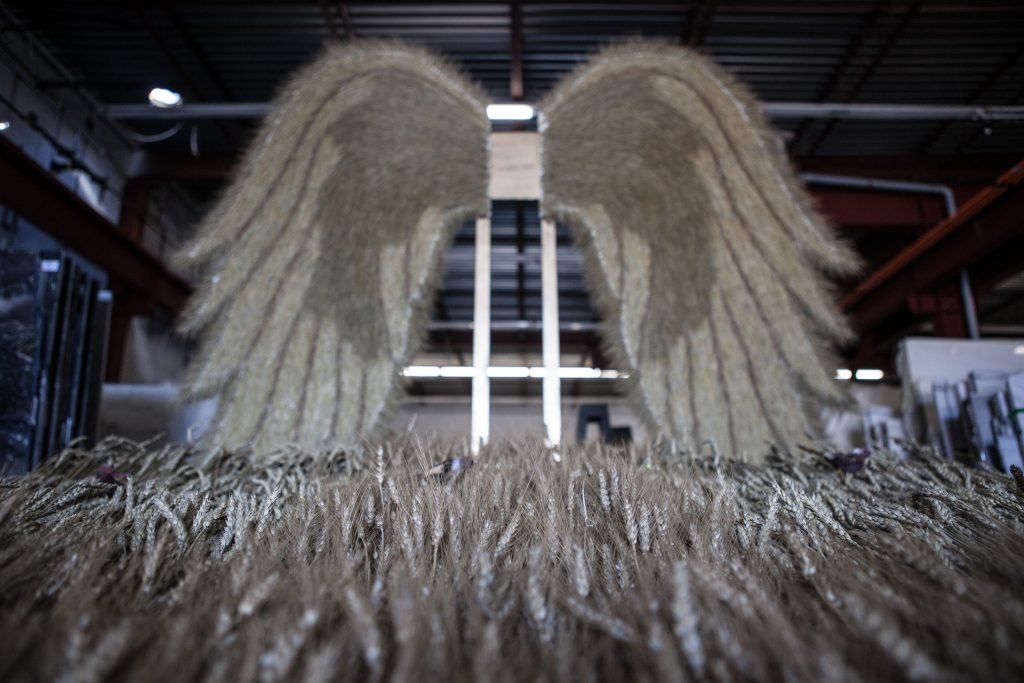 The festival of wheat is a three-day event celebrated over a weekend. On the Friday evening, more than 360 participants joined in the festivities by attending a supper in Saint-Simon-Apôtre Park. They feasted on a typical, flavourful Jelsi dish of tomatoes, peppers, onions complete with eggs and sausage. The party continued on Saturday with music and an arrosticini tasting-skewers of sheep-a true delicatessen of southern Italy. The third day was splendid. After Sunday Mass, the floats paraded ceremoniously between the streets of Reims and Chabanel. To end these three festive days, fireworks colored the sky to the delight of members, residents and curious onlookers.

Thanks to Andréa, future generations of Italians in Quebec can, like their ancestors, express their art by upholding traditions which continue to be celebrated across the Atlantic.