Marie-Chloé Duval’s journey has been anything but ordinary. In 2016, she decided to dedicate her life to painting…after earning a master’s degree in criminology. She made it her profession – one that she practices and feeds with passion at her studio on Louvain Ouest. An area of the District Central where she feels like a kid in a candy shop.

The story of Marie-Chloé Duval is about a girl who changes the course of her entire life by discovering her true self. 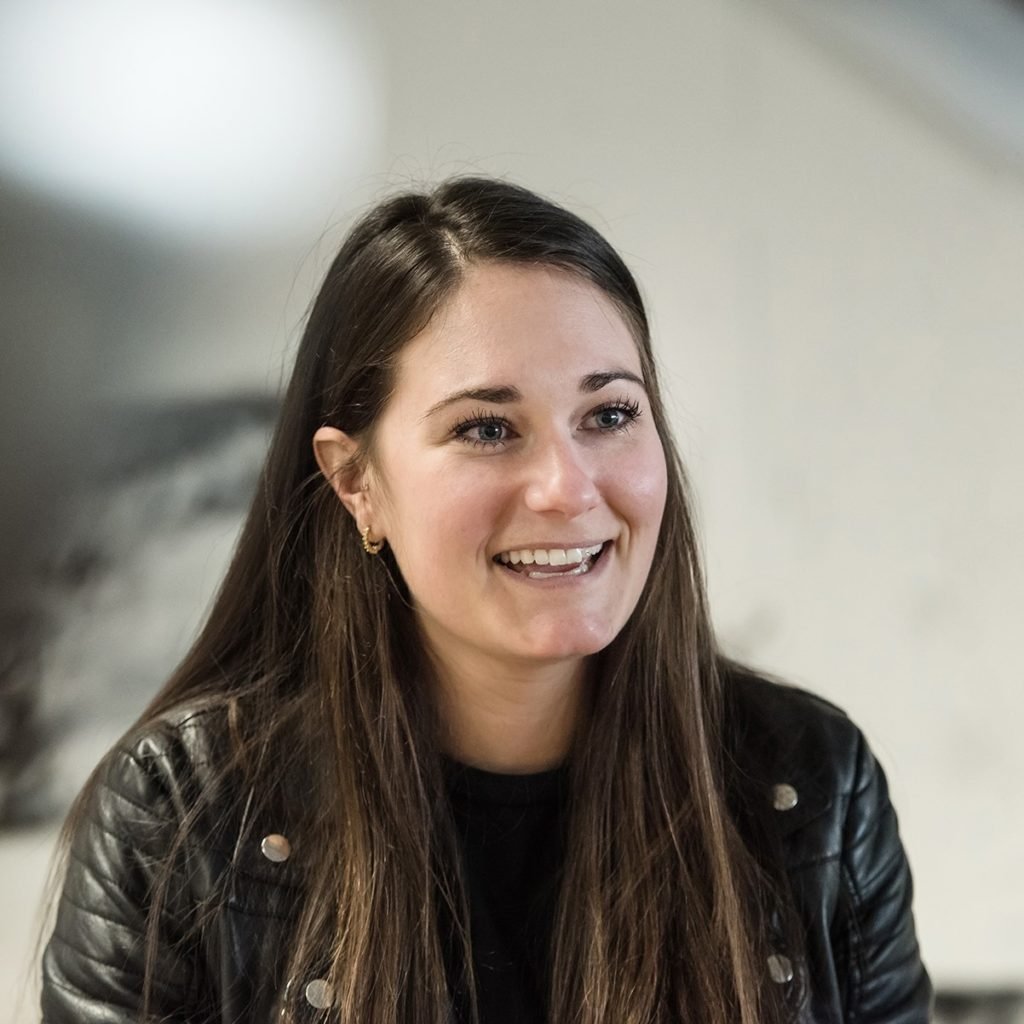 The fire of passion was simmering inside her waiting to be set ablaze by a single spark. The fire broke out in mid-2010. For this Bas-Saint-Laurent native, who attended CEGEP de Rivière-du-Loup, her future seemed set in stone: she would become a university professor. But once she had earned her master’s degree in criminology, everything changed. Her game plan fell apart; her initial pursuit was suddenly a thing of the past. “Before jumping into an academic career, I wanted to take a year off to try something different. I didn’t have a clear idea in mind. I even interviewed for a job as a garbage collector…” It was during this sabbatical that she started to paint, never to put her brushes doing again. The planets had aligned. Her artist’s soul, which filled the pages of her school agenda, was finally revealed for good. The Symposium de peinture du Kamouraska would only confirm the obvious. In July 2016, Marie-Chloé Duval participated in her first symposium, taking home many prizes including the Coup de cœur du public and public acclaim. Her first sale? She remembers the moment as clear as day. “I charged $300, feeling as though I had just stolen from the person who had purchased my piece. I was really uncomfortable with the prices; it was new to me.”

The human in watermark

Marie-Chloé’s universe navigates between figurative and abstract, with a predilection for black and white, which seems to have rubbed off on her sense of style, the monochromatic look that jars with her colourful personality. The human has become a core element of her work, even if it does not appear on her canvases. The painting of landscapes or places is very important and symbolic in her eyes, because it allows her to question the relationship we have with the environment and the impact it can have on our lives. To illustrate her connection with the art, the visual artist loves to vary her materials, such as the supports she uses. Acrylic coexists with Indian ink, graphite, or more recently, embroidery, which she subtly integrates into her works. 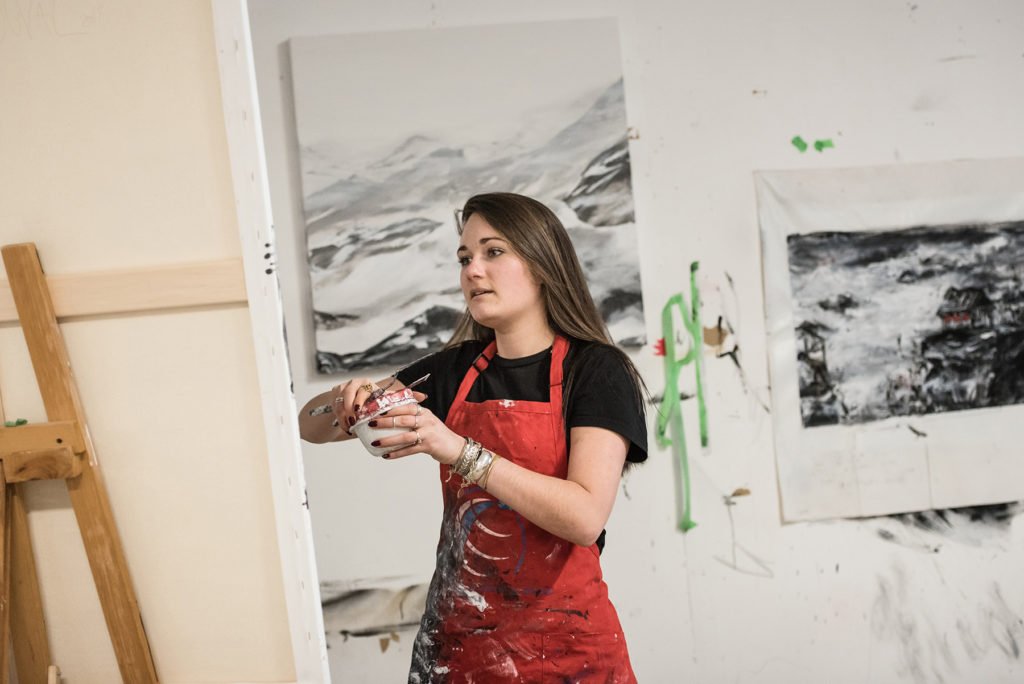 In harmony with the District Central

Today, Marie-Chloé is fortunate enough to live her passion. She left her native Bas-Saint-Laurent to establish herself in Montreal, a new feat in her emancipation as a woman and an artist. Last June, she left her studio in the Plateau Mont-Royal to move to space that better suits her needs. “I was looking for a place that wasn’t too expensive, was spacious and gave me a good feeling.” It was love at first sight in the District Central, on Louvain Ouest, near the emblematic Chabanel Street. The native of Saint-Pascal-de-Kamouraska now feels at home, and has nothing but kind words about the owner, the industrial character of the building and the abundance of light that shines in. She says she is happy to have set up her easels in a neighbourhood whose rebirth is a source of inspiration for her creativity.

More than one string to her bow

Since 2016, Marie-Chloé’s schedule is completely full. In four years, she has garnered experience and participated in exhibitions in Canada and the United States. 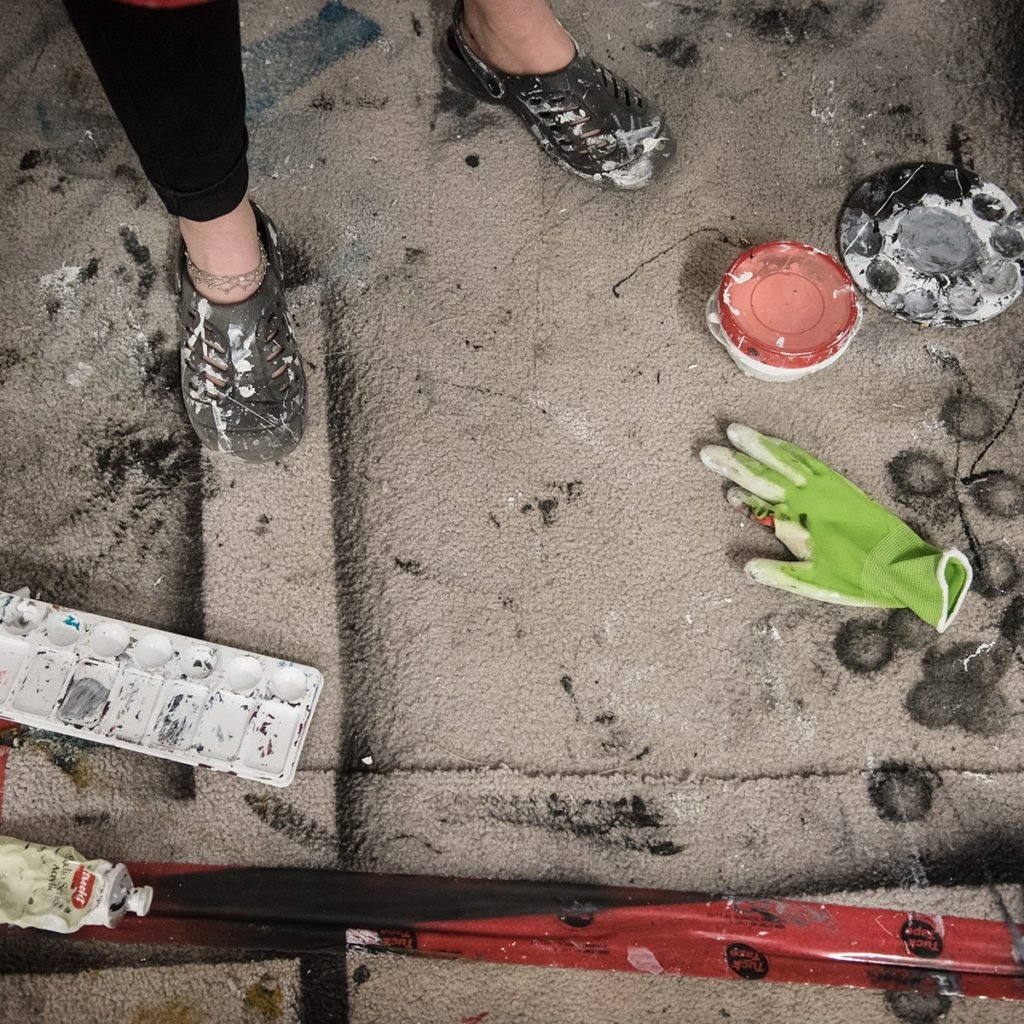 Galleries in Montreal and Toronto have also picked up. Always eager to explore new horizons to stimulate and nourish her creative fibre, this young woman takes pleasure in stepping outside the lines. In an effort to enrich her knowledge, she enrolled in an oil painting course in Vancouver for example, in order to perfect her technique with a mentor. She also enrolled in a course at Concordia, and is planning a residency in Greece this year, after her stint in Finland last year. She was also responsible for the cover of the novel Halifax Express, published by Éditions Alire (written by Lionel Noël), as well as the drawings on the bottles of La Grande Hermine, a Quebec pastis made by the Fils du Roy distillery, in the Bas-Saint-Laurent.

Art made available to all

In a context shaken by the coronavirus, Marie-Chloé has had to postpone most of her projects planned for this year, such as the one with L’Atelier Balance, a yoga centre on rue Chabanel, which aims to blend meditation and creation. Not enough to dampen her fierce desire to make art accessible to as many people as possible. This will notably involve creative workshops, which she is eager to resume, where she solicits the artistic fibre of her students, young or not so young. She could also offer this experience to people living or working in the District Central. An idea that lights her eyes. The future will provide the answer. 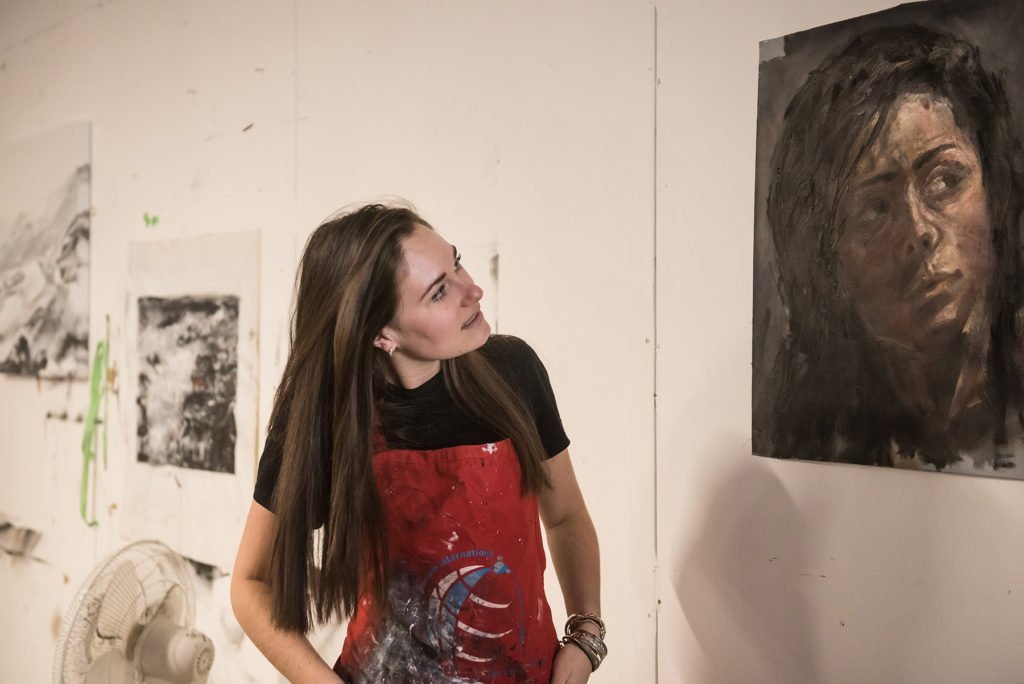 For more information about her work and future exhibits: