After two months of work and consultation with literature and local experts, UQAM’s Urban Planning students presented their proposals to sign the District Central territory. One team stood out, proposing a concept based on the genesis of the territory and meeting the feasibility objective put forward by the SDC, initiators of the project.

OVERVIEW OF THE MANDATE

The brand image and positioning of the District Central were developed in conjunction with the socioeconomic community in 2018. Since then, the SDC has been implementing an annual high-impact communication strategy. To do so, it refers to the brand’s identity and expression guide.

The next step is for the SDC to move forward with the roll out of the District Central brand on its territory. Before working on a graphic design, it takes an urbanistic perspective. The goal is to increase the awareness and recognition of the District, through the placement of identity markers, and focusing on the architectural character of the area. The signing of the territory will support and add value to the requalification of the District Central as well as reconcile business and social life.

Identified as a priority by the SDC’s Urban Planning Committee, this project was registered in the Riipen platform.  The SDC has had a partnership with Riipen for nearly two years, pairing with them for an urban planning course at Université du Québec à Montréal last winter.

1) Understanding the brand and the territory : The students were introduced to the territory – which is made up of five geographic sectors with distinct and complementary characters – to understand the District’s DNA. They were given access to various documents and guides produced by the SDC and were given the opportunity to interview volunteer experts from the territory. They were to learn about the District’s development vision and the urban planning work carried out by the SDC’s working committees. Two working sessions (February 1 and 22) were organized on the CONSULTe platform to give the groups of students the opportunity to exchange with local entrepreneurs and workers.

2) Propose methods of signing the territory and evaluate feasibility: Students were asked to choose one of three themes to develop their concept: Active, Vibrant and Safe Spaces; Territorial Identity; and Community. Closer to the deadline, a third working session (March 22) was organized with volunteer business experts to provide feedback and recommendations, if any, on the concepts proposed by students

The team called “L’équipe Incroyable” ultimately emerged as the winner. Having worked on the theme “Active, Vibrant and Safe Spaces”, the team proposed the concept L’ENTRELACS, transposing elements of the District Central’s identity through a waterway along l’Esplanade and recalling the textiles industry and the creativity of the area. With their submitted proposals, the signature of the territory and urban planning can be realised in the short term 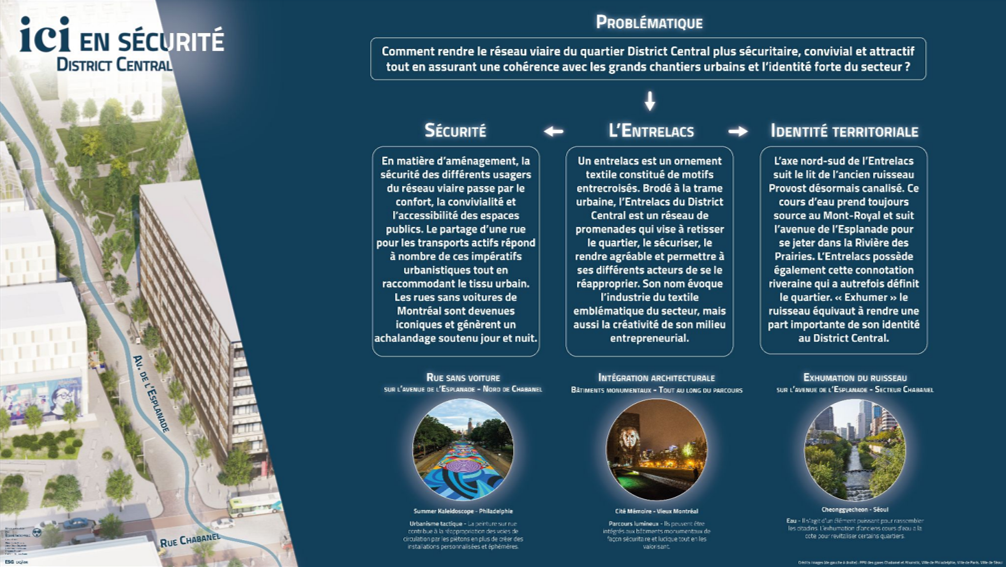 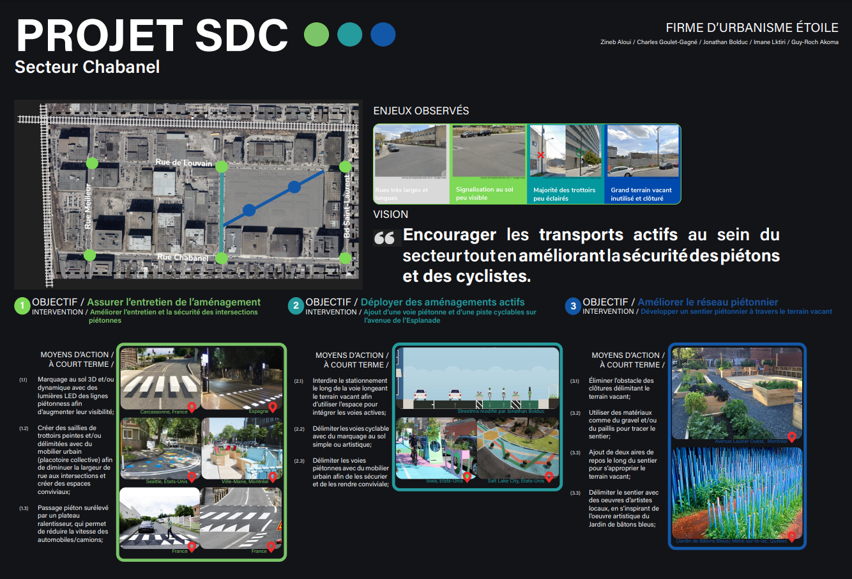 A special mention was also given to the “Firme d’Urbanisme Étoile” team for the FEASABILITY of their short-term concept with targeted and clearly illustrated initiatives that refer to the brand of the neighbourhood. Congratulations to Zineb Aloui, Charles Goulet-Gagné, Jonathan Bolduc, Imane Lktiri and Guy-Rock Akoma.

And finally, a special mention in sustainability was given for the “Green Art” green wall by the team composed of Catherine Bérubé, Jérémy Labrie, Tristan Champagne-Lessard and Victoria Dussault-Vila. Combining economic and sustainable development, the concept promotes the commercial activities of the neighbourhood while responding to the need for green space –  expressed by residents and businesses alike – all through a cultural and creative lens.

This project was made possible thanks to the involvement of expert volunteers, entrepreneurs, and residents of the District Central who have the development of the neighbourhood at heart. The SDC would like to thank them for their exceptional commitment to this project:

Thanks also go to ELEMENTS Planification Urbaine (Martine Peyton and her team) for their urban planning support and to Geneviève Dufour (SDC District Central) for coordinating the project and for her participation in each step of the process, as well as Hélène Veilleux from the SDC District Central.

Lastly, thanks to Sophie Paquin, professor of urban planning at UQAM, and to her students for having embarked on this innovative adventure.

This work completes one more step in the signing of the District Central territory. Inspired by all the proposals and ideas received, the SDC will be looking at the next steps to take in the coming months.